Many Americans became hopeful in October 2020, when JPMorgan Chase ("Chase Bank") announced that it was adopting a financing commitment aligned to the goals of the Paris Climate Accord. Since Chase Bank was at the time (and still is) the largest funder of fossil fuels of any bank in the world, the policy was generally well-received, especially since Chase also promised to soon make public, its carbon reduction targets for 2030.

Unfortunately, when Chase recently released its 2030 carbon reduction targets--the first major U.S. bank to do so--there has been wide-spread disappointment, at least among climate folks. Using a gimmicky measurement concept called "carbon intensity" in creating its emission-cutting goals, Chase Bank was essentially saying that it would meet certain greenhouse gas (GHG) pollution targets by 2030, but not necessarily reduce its overall GHG emissions or financing of fossil fuels.

It is clear that Chase's carbon targets are simply at odds with cutting emissions in half by the end of this decade, a goal announced by President Biden, not to mention limiting the earth's warming to 1.5 degrees Celsius as nations aspired to in the Paris Accord. Therefore, Chase Bank's efforts to address the climate crisis amount to "greenwashing," and should cause great concern to anyone concerned for the future of our planet. 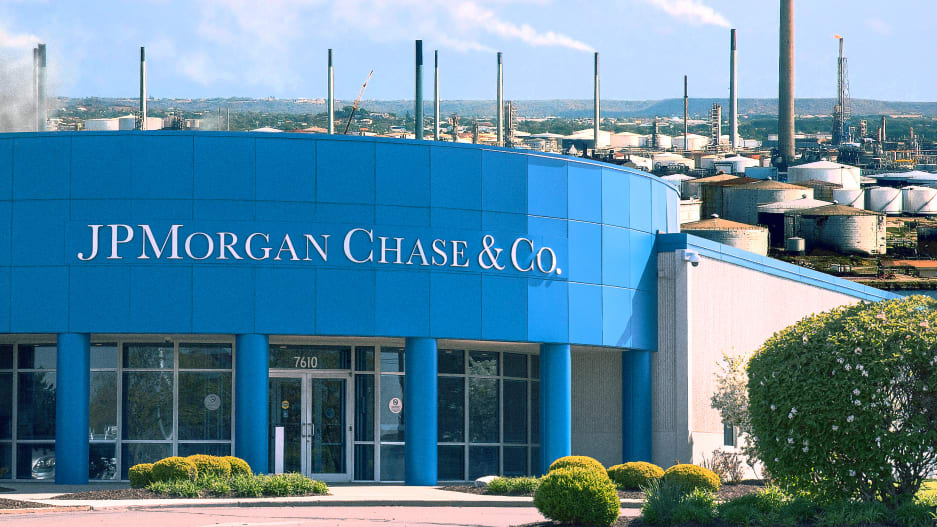 To push back against Chase Bank's wholly inadequate plans to address the climate crisis, Climate First! and others across the country, as part of a campaign by the country-wide, Stop the Money Pipeline (STMP) coalition, will begin on Tuesday, June 1st, to deliver "greenwashing" awards to Chase Bank branches around the U.S. It is critical that the Chase leadership get the message that their refusal to start cutting their planet-warming pollution is unacceptable. In addition, other large U.S. banks must see that Chase pays a price for its misguided climate policy; otherwise, the others may well follow suit.

Here's what you can do to help: While Climate First! will be delivering greenwashing certificates to Chase Bank branch managers, mostly in the Washington, D.C. region, we are also calling on other concerned citizens to deliver the award to their local Chase Bank branches. Your Climate First! action is simple: 1) review this short article and Rainforest Action Network's (RAN) report about the greenwashing issue; 2) print out the certificate, and two other documents below; 3) go to your local Chase Bank branch (or two), and ask to speak to the manager; 4) present the award, RAN report, and CEO letter to her/him with a verbal explanation; 5) take photos and/or a video of your action, and later post them on social media. See details of your action below. 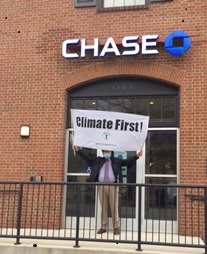 Note: We strongly encourage that all actions follow CDC's COVID-19 pandemic guidelines, and be limited to a few participants.

DETAILS
What: On behalf of Climate First!, give two documents with a short talk, to a Chase Bank manager.
When: Tuesday, June 1 through Saturday, June 5, 2021.
Where: A local Chase bank branch or two. Find closest branch by clicking here. Important--please tell us which Chase branch you will visit; we don't want action teams running into each other.
Misc.: Print out the certificate, CEO letter, and RAN report. One rule of CF! actions: please be respectful in "word and deed" while sharing your action's demands.

Post-action: When posting your photos/video, use hashtags, #healthisclimatefirst and #greenwashing, to allow STMP and Climate First! to amplify your posts. Also, use handles, @Chase and @ChaseSupport, to ensure that somebody at Chase Bank sees your work.

In close, remember this when you are carrying out your simple action(s) vs. Chase Bank for its blatant greenwashing of the climate crisis issue: there are likely hundreds of people around the U.S. simultaneously doing exactly what you are doing at a Chase Bank branch. And while you should feel more powerful for the thought, imagine how the leadership at JPMorgan Chase will feel once they learn of all the actions.